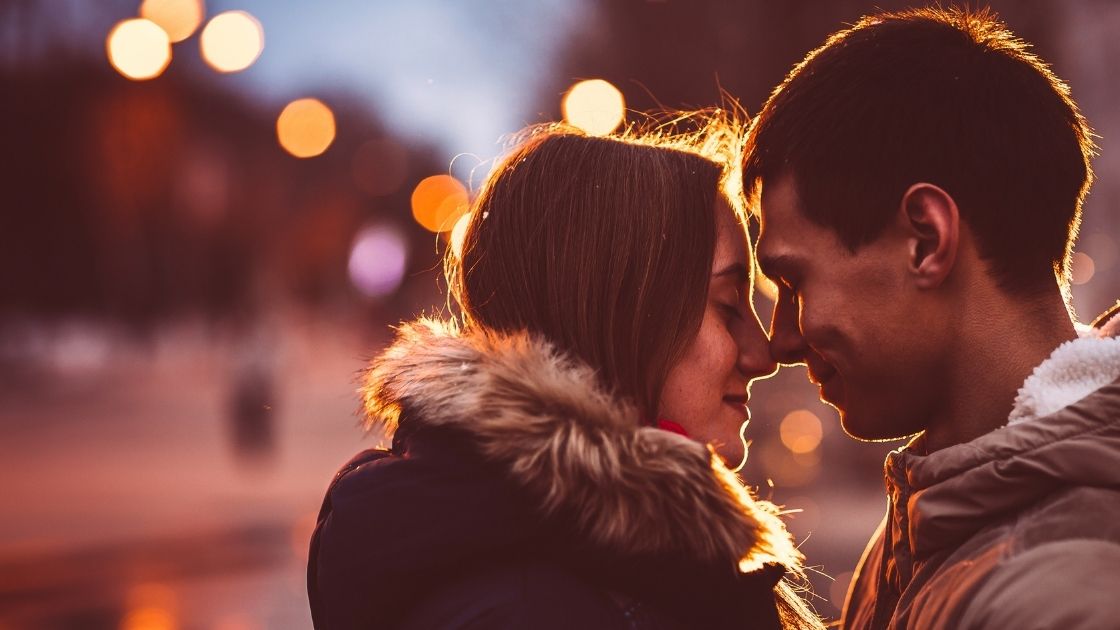 Have you ever found yourself in a situation where you really want to kiss a guy, but you keep asking yourself the dreadful question, “does he want to kiss me?”.

Here are 11 physical signs he wants to kiss you:

1. He Stares at Your Lips

It’s no coincidence that a guy staring at your lips is at the top of the list of ‘’signs he wants to kiss you’’, it’s because it’s a sure sign he wants to tongue wrestle with you or something less intense.

It’s quite simple; humans tend to stare at things they desire. The same way you stare at a pair of shoes or a piece of cake through the display glass, he stares at your lips because he wants to kiss you.

If you two happen to be deep in conversation, check where his eyes go. If he stares at your lips once to three times, it’s probably out of impulse, but anything more than that, or better, if he can’t keep his eyes off of your lips, you don’t have to wonder if he wants to kiss you.

Contrary to popular belief, men aren’t as composed as they let on. If anything, they’re usually more nervous in romantic situations and they fidget as a result.

Scientists also suggest that fidgeting is actually the brain’s way of remaining focused on the task at hand, and in this case the task at hand would be finding a way to make out with you.

In addition to fidgeting, the following signs also suggest that he’s nervous or he’s anticipating something:

Unless you’re speaking really softly or you two are in a loud environment, a man leaning into you while you’re having a conversation is a good indication that he wants to lock lips with you. Guys do this without even realising it.

You’ll notice that as the conversation gets more heated his face seems to move closer to you and that’s because he’s trying to set the mood.

4. He Licks his Lips

When I say he licks his lips, I don’t mean the way The Joker licks his lips before doing something devious, because that’s really creepy. Instead, he licks his lips swiftly and seductively while staring at you, sort of like what Morris Chestnut does whenever he plays his signature ‘’good guy’’ role in movies.

Nothing screams ‘’he wants to kiss you’’ like a guy licking his lips. Men do that to prepare for what’s about to happen. They will lick their lips, even moisturise them and do a bit of mouth maintenance before they attempt to kiss you.

Men understand that the perfect kiss doesn’t just happen, a number of things have to be set in place first. If the two of you have never kissed, he’ll speak softer and softer until he’s quiet and by then you’d already be making out.

Guys strive to be as smooth as possible with their actions. That said, a guy would never attempt to kiss you with no prior warning of some sort, because that might ruin the moment.

Also, this gradual approach gives them time to see how you respond so they know for sure whether you’re interested or not.

It’s almost like preparing for a marathon; you don’t just start running and hope for the best. You warm up and hydrate yourself in preparation for the race.

You may have noticed his hand brushing yours once too many times or he rubs your arm and shoulder affectionately every chance he gets, or even better, if he reaches to brush a few strands of hair away from your face.

Him being touchy means he’s close and comfortable enough to initiate the kiss, and as long as he’s not making you uncomfortable, it’s a good sign.

If you suspect that he’s touchy only because he’s unfamiliar with the concept of personal space, gauge his interest by also making physical contact, and if he responds, he definitely wants to kiss you.

Lingering refers to doing something for longer than necessary or expected. For instance, you two are having a conversation and he reaches to brush a few strands of hair out of your face, but he doesn’t immediately take his hand away, instead he pauses for a bit.

Like I mentioned above, men will make sure the mood is right before they go for the kiss. Him lingering is a way of testing the mood and letting you in on what’s going on in his mind. If he lingers on more than one occasion, you can bet your hat he wants to kiss you.

8. He Presses his Leg Against Yours

It’s normal for someone’s leg to brush yours or even lightly press against yours if you’re sitting close to the other person, but even when that happens, either one of you will naturally try to create some distance so as not to make physical contact.

However, if his leg does happen to touch yours and he doesn’t make any effort to create distance, despite there being enough room to do so, then he’s definitely enjoying being that close to you, possibly because he wants to kiss you.

If you don’t move your leg away, he’ll take it as a signal to move closer and eventually lock lips with you.

Going back on the ‘’setting the mood’’ analogy, men will look straight into your eyes without breaking eye contact if they’re interested in kissing you. Not only does it set the mood but it’s a way for them to communicate their intentions without being too forward.

“Some adults are so self-conscious that they are unable to look, for longer than two seconds, a child or even an animal in the eyes.”

That in mind, although this is a dead giveaway, most guys won’t do this, simply because it requires a good amount of confidence.

However, if he’s really confident and prolongs eye contact, he’s sending you a message and he’s awaiting the greenlight.

10. His Pupils Are Dilated

I know this is a little strange but it all boils down to science. For a guy to want to kiss you, he’d have to be attracted to you and at times he may even have some type of romantic interest in you such as wanting to get into a relationship with you, eventually.

What does this have to do with dilated pupils? You’re probably wondering.

The human body contains two love hormones, namely, Oxytocin and Dopamine. These hormones have an effect on pupil size. An increase in these hormones causes dilation of the pupils.

You should however note that not every man staring at you with dilated pupils is attracted to you, instead you should use this sign in conjunction with the ones mentioned above.

11. He Listens More than he Speaks

‘’I lift myself up on my toes, and his face comes down at the same time. His lips are soft, softer than I could have imagined…”

That’s a kissing scene from the book, An Ember in the Ashes. Most kisses occur that way, the partners move closer to each other simultaneously, but to get to that point, some type of chemistry would have to be created beforehand.

If you find yourself doing most of the talking as the conversation proceeds and he seems to be listening attentively while keeping eye contact. Then unless you’re discussing a really interesting topic, he’s building enough chemistry to allow him to kiss you.

If you’re dying to know if he wants to kiss you and you’ve read hundreds of articles on how to tell if a guy wants to kiss you, then maybe you’re just overthinking. Guys are really simple so all you have to do is pay close attention to their body language.