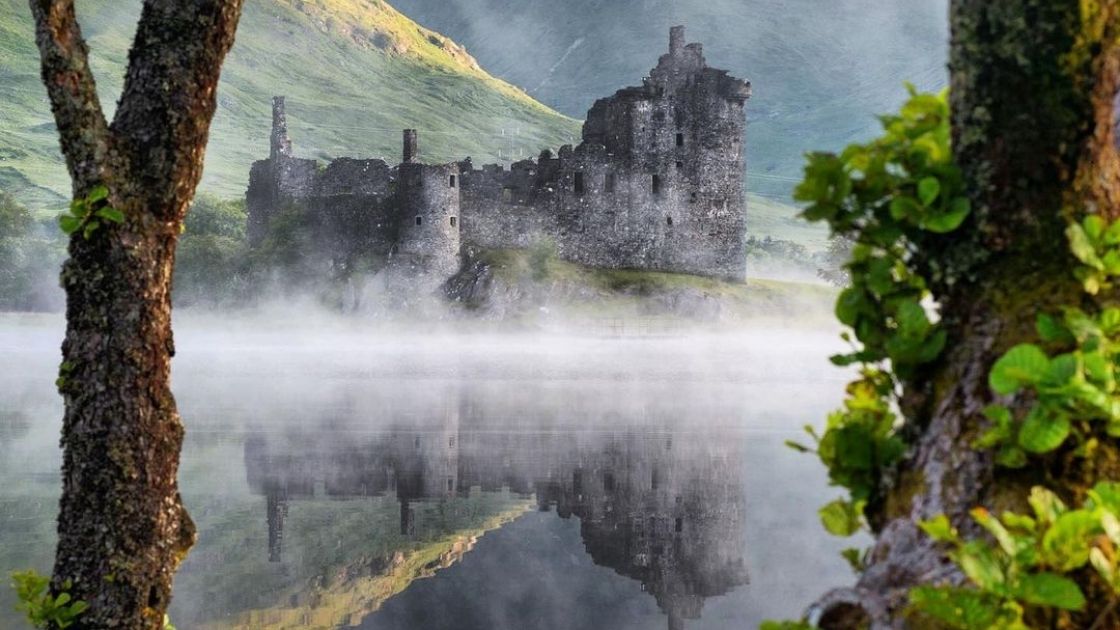 Evoking fantasy fairytales, legends, and folklore, castles carry enchanting magic craved by many travelers. Steeped in medieval history and architectural opulence, Scotland is home to some of the most beautiful castles in the world.

Surrounded by the Atlantic Ocean to the northwest, the North Sea to the northeast, and the Irish Sea to the south, it’s no wonder the Scottish dotted their highlands with stronghold forts and castles to house their noble and protect them from their enemies.

From 8th century castles built to project noble wealth and status, to 13th-century medieval strongholds, you won’t have to venture too far before you reach an enchantingly romantic castle atop a dramatic cliff, protected within a wild valley or on a shimmering lakeshore.

Let’s take a step back in time and uncover the stories and legends of some of the most breathtaking castles in Scotland.

Located just outside the city of Alford, Aberdeenshire, the Craigievar Castle was originally home to the Scottish lowland Clan Forbes-Sempill, who were early members of the well known modern Forbes family. The exterior of the castle has not been changed since it was built, and the interior boasts 7 stories filled with opulent interiors.

The pale pink building completed in 1626 is set among the scenic rolling hills of the Grampian Mountains. With its band of conical tower turrets, it’s a great example of the Scottish Baronial gothic-inspired architectural style and is even said to have been the inspiration for Walt Disneys Cinderella Castle.

The castle, which is filled with historical artifacts, art, and weapons, purposefully lacks modern lighting features, therefore giving visitors a chance to view the interior and its artifacts in the same dim light as hundreds of years ago.

Dunvegan Castle and gardens sit at the heart of a massive conservation land area on the Isle of Skye. The castle is the oldest continually inhabited residence in Scotland and has been home to the Clan Macleod for over 800 years. The region is scattered with native wildlife, woodlands, mountainous hills, and rural lake towns.

This geometric-inspired castle looks like something straight out of a movie set and houses some Scottish clan treasures to match its legend. The legendary Fairy Flag, which is said to have magical powers that when hoisted in battle would help the Macleod Clan defeat whatever enemies they faced, is on display in the castle.

The castle gardens span five acres across the land and are a beautiful lush oasis within a wild and barren moorland. Surrounded by shimmering rivers and lakes which lead to the sea, the castle even has a ‘water garden’ with different water features and bridges for tourists to explore.

The Dunrobin Castle is the largest in the northern highlands and boasts 189 extravagant rooms. Located along the shores of the North Sea in the Scottish Highlands, the castle’s exquisite design takes influence from French Chateau’s as well as Londons houses of parliament.

It has high conical spire towers and rows of symmetrical windows complemented by a delicately organised garden that resembles Paris’s Palace of Versailles.

Some early parts of the building have been dated back as far as 1275. The original home stood for 200 years as a simple fortified square with walls six feet thick, until it was extended by later families.

Parts of the house are still home to the original inhabitants – the Dukes of Southerland. During the First World War, the castle was used as a navy hospital after which it was briefly used as a boys boarding school.

Castle Fraser is one of the best places to soak in the historic atmosphere of ancient Scotland. The castle was originally built as a medieval stronghold, but was added to and renovated to suit the needs of the growing families. These ongoing additions to make the family home more comfortable and luxurious has resulted in an eclectic mixture of architectural styles and datings.

Let your imagination run wild as you explore the enormous house filled with secret trap doors, spiral staircases, family treasures and mementos, and even a spy hole!

The beautiful walled-in garden contains a herb garden, a medicinal herb patch, and an organic fruit and vegetable garden.

Edinburgh Castle was not only once the residence of the royal family of Scotland but is one of the oldest fortified castles on the European continent.

Home to much of England’s royalty for centuries, Edinburgh Castle still houses the Crown Jewels of Scotland, which are on display for visitors in the Crown Room. During the Second World War, the Crown of Scotland was hidden buried in a medieval bathroom closet in one of the castle’s towers.

The fortress was built 443 feet above sea level on a protruding volcanic rock called Castle Rock, giving it strategic advantages for defending its walls from above. Nevertheless, the building has changed hands numerous times and is the single most besieged place in Brittain. Castle Rock has been inhabited for over 3000 years by ancient Celtic tribes.

Castle Stalker is a comparatively small, yet quaintly picturesque stone castle built on a small island in a tidal outlet of Loch Laich. It’s a four-story medieval home and with walls up to 2.7 meters thick, functioned as a protective fortress for the clan families who resided in it.

The castle has a history steeped in clan rivalry, illegitimate children, and murder. Today it is privately owned and has been restored and renovated after centuries of battles left the home uninhabitable.

The most unique part about this castle is the family who owns it. They restored the home with their own hands and ingenuity and if you visit the castle, will even be your tour guides!

A glorious castle in the heart of Aberdeenshire, Fyvie Castle has a past as rich as its interior. The castle was a personal home for the Scottish monarchy until the 13th century. It’s is a relic for art lovers and is filled from floor to ceiling with a famous portrait collection and other fine oil paintings.

The castle also houses impressive furniture and tapestry collections. The woven tapestries tell an imaginative and colourful story of the castle’s history.

Throughout the castle’s history, it has been a tradition for each of the five families who lived in the castle to construct a new tower, leaving the castle with five towers in total.

Fyvie Castle is even speculated to have some ghosts living within its walls and has been investigated for its paranormal activity.

The Drummond Gardens surround the Drummond Castle, which was built around 1490 atop a rocky outcrop. The opulent gardens are a great example of a Scottish Renaissance garden.

Built on a rocky outcrop overlooking the North Sea, this castle has incredible views and is nothing short of something you might see in a battle on Game of Thrones. There is a deep pitch dug out in front of a large, windowless stone wall, designed to ensure enemies could not easily siege the building.

When you visit this stronghold, you’ll be able to climb the towers of Tantallon to get a glimpse of the panoramic views and descend into the depths of the dungeons where prisoners of war were kept.

Built on the shores of Loch Awe in the mid-1400s, Kilchurn Castle sits in the corner of a large walled-in courtyard, The house stands five stories tall and comprises of a basement cellar and dungeon, a great hall on the ground floor, and living quarters above.

The castle was repurposed as a stronghold and included barracks for a garrison of over 200 men during the 1600s. Its dramatic crumbling stone walls make this fort an ominous sight to be seen.

Built relatively recently in comparison to other Scottish castles, Carlowrie Castle was built in Edinburgh in 1852 and is full of contemporary history. Now used as a luxury venue for weddings, parties, and other occasions, the castle was originally built by a wine merchant family.

The current owner of the castle is only the second generation to live in the estate, which is managed and overseen as their business.

Surrounded by 32 acres of pristine manicured gardens, the castle is a wonder to the eyes. Some people say that it looks like the Disney castle, with its turreted towers, round balcony tower, and lush creeper clad walls.

From turreted towers and manicured gardens to fortified stone walls, Scotland won’t disappoint when it comes to castles. The region is crowded with clan history, folklore, and legend which is told beautifully by the extraordinary castles scattering the landscape.