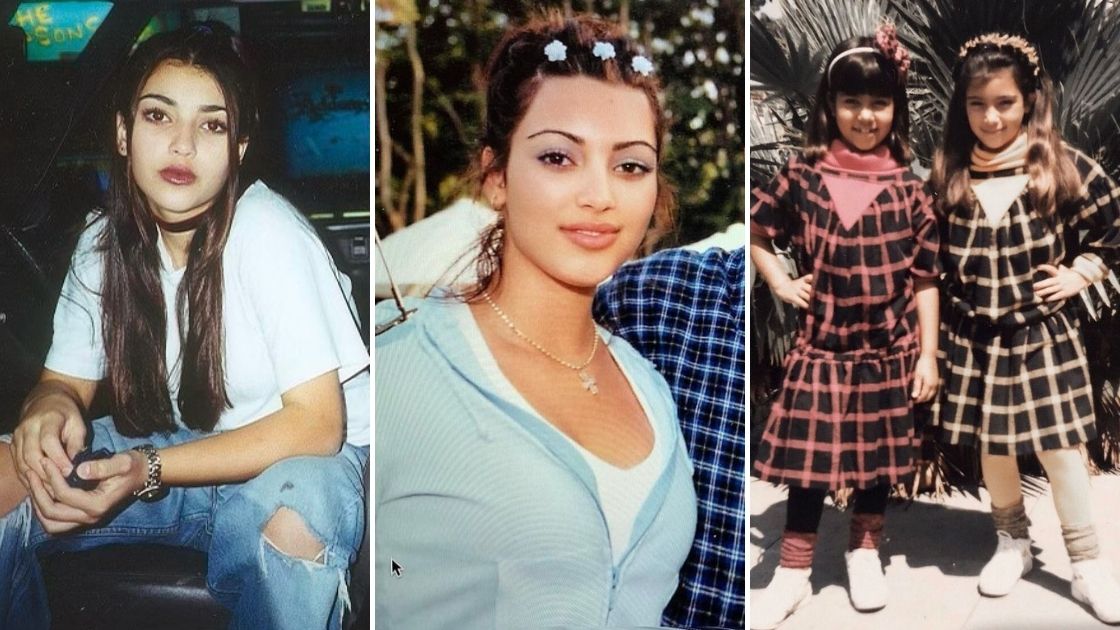 Old pictures of Kim Kardashian before she was famous. Rare 90’s photos & childhood moments that the reality star has shared from her younger years.

We all know her as the style icon who became the star of the entertaining reality television show Keeping up with The Kardashians. Kim Kardashian is now a household name across the world, and one of the most famous celebrities of the 21st century.

With a drama-filled and exciting life like hers, it’s no wonder she has 277 million followers on Instagram. But Kim wasn’t always the megastar she is today. In fact, she only really became famous after the release of the first season of Keeping up with The Kardashians in 2007.

Here are some of the best pics that Kim has shared of her younger years:

You might notice that tons of Kim Kardashian younger pictures were taken outside in the garden. This pic shows a happy Kim enjoying some sunshine at about a year old.

How could I not share this cute pic of KK as a baby?! It’s no surprise that baby Kim loved a good pink outfit.

Kim Kardashian As a Pre-Teen

Kim sported this retro hairstyle when she was staying with her grandparents in San Diego. Her grandma had just bought her this French-inspired dress, and immediately had to document it!

Here’s a pic of Kim aged 7. In the caption, she mentions that she used to have an obsession with bows!

This picture of Kim Kardashian when she was younger makes me wonder if she always knew she would be a household name and celebrity when she grew up.

Kim at 6 years old is too adorable to handle. This pic taken in 1986 is one of my favourite Kim Kardashian 90s photos.

Teenage Kim Kardashian in the 90s

It really seems like Kim just skipped puberty and just became a beautiful teenager instead. This pic of KK sitting in her parent’s car is one of my favourite Kim Kardashian 1990s pics.

Here’s a pic of Kim Kardashian in her prime teenage years. This was taken at her Sweet Sixteenth birthday party, the moment her dad surprised her with her first car! Kim shared this pic as a tribute to her late father Robert Kardashian on what would have been his birthday.

The Kardashian clan has always been a big fan of a beach vacation. If you ever wondered what she looked like in her awkward teenage years, here’s a pic of Kim Kardashian at 13 in a bikini. Not too awkward at all, if you ask me.

How about a blurry 90s throwback of Kim Kardashian wearing a velvet choker necklace?

Just another image of Kim Kardashian leading style trends in the 90s.

Even Kim Kardashian age 12 is a style icon. Here she is wearing her favourite red lipstick in 7th Grade. What do you think her makeup artist would think of this look today?

Here is another pic of Kim looking absolutely beautiful in 7th Grade.

For forever, Kim has been a massive fangirl for Drew Barrymore. If you don’t remember, Drew was famous for wearing a single daisy in her hair. This pic shows a 90s Kim Kardashian paying tribute to her biggest idol. She even used to pluck her eyebrows to look like Drews!

The cherry on top – Drew even responded with a regram of the photo saying, “Regram @kimkardashian ‘8th grade…Drew Barrymore was my everything’ cmon !!! I had to share! This picture is just JOY!!!!!!!“

Even world-famous celebrities have to take school photos, right? Can you imagine the Kim we know today attending a Catholic girls school? Well, here she is in the 8th Grade!

Another school photo of Kim Kardashian in 9th Grade.

Can you believe this is what Kim Kardashian looked like at the age of 16? It’s like she was born a star.

A beach holiday pic of Kim and her sister aged 19 and 20.

Here is another picture of our favourite star. In the caption, Kim happily mocks her style saying “It’s the outfit from Judy’s, candy necklace and barrettes for me…“

I love this classic of Kim aged 18 in an old car, on her way to visit her sister and best friend at the University of Arizona.

Kim and Kourt sporting their 90s thin brows in style.

I think the caption of this one might be even cuter than the pic itself. Kim posted this to wish her bestie Allison a happy birthday. The two were travelling together in Paris.

Kim at a fashion fitting in Miami in 2012. This was around the time KUWTK really took off.

Kim with Some of Her Best Friends

This photo of Kim and her best friend Allison in university is a classic crowd-favourite. It’s the turquoise liner on her eyes for me…

Can we take a moment to appreciate this cute pic of Kim with her best friend Allison and big sister Kourtney posing for pics together in high school?

Here’s another great photo of Kim and three of her best friends at age 19. Kim states that this pic was taken on Y2K New Years Eve 2019/2020 and that her crew decided to spend the night in their pyjamas just in case the world ended!

I love these two pics of sisters Kim and Kourtney giving their late dad a loving kiss on the cheek.

If there was a feature film on this video clip, I would be at the front of the audience for sure. The clip shows the three Kardashian sisters singing the old-school classic ‘I think we’re alone now’ by Tiffany. Best of all, Kris Jenner has dressed the girls in an all silver dress code – from the outfit to the headdress to the jewellery. Let’s give them a round of applause.

The Kardashian sisters before their glow-up.

Even though they’re only one year apart, Kourtney Kardashian will always be Kims only big sister. Here the two are dressed wearing matching overalls and bows in their hair.

Another pic of the sisters wearing (almost) matching outfits.

Kim and Kourt looking cool as ever in a Neverland Valley Ranch photobooth circa 1994.

Here’s a pic of Kim and sister Kourtney living their best life in 1994. Kim was only 14 in this picture!

I can’t get enough of this picture of Kim, Kourt and Khloe opening up their new matching Christmas pyjamas while wearing matching pyjamas already. What would Kanye think of these style icons?

Kim posted this throwback for Kourts’ birthday in 2019.

Kim and Kourtney have so many more memories together. These sisters were unstoppable, especially before their adult life as the worlds most influential reality stars. Here the two are out at a party at the University of Arizona, where Kourt was studying at the time.

This pic was taken just before Kim became one of the most famous people in the world. It was taken in 2007, the year that the first season of Keeping up with The Kardashians was filmed.

Kim and her older sister all glammed up in the 90s.

Kim with her Half-Sister Kendall Jenner

Kim Kardashian has always been a loving big sister. She posted this pic of her spending some quality time with baby sister Kendall Jenner for Kendalls birthday.

This is the ultimate picture of the original Kardashian crew. I think baby Kim looks just like her own daughter North.

It’s no secret that the Kardashians are very family-oriented. If you’ve watched any of their reality TV shows, you’ll know they love to spend tons of time with their closest relatives. Kim has a special bond with her grandmother Mary Jo Campbell, who she is pictured with here. In the caption, Kim writes ‘She’s probably the only person on this planet that I still remember their home number by heart lol’

How sweet is this pic of Kim as a little girl and her baby sister Khloe hanging out with their dad? I’m guessing momager Kris Jenner took this lovely photo!

I love this family photo of the Kardashian kids and their dad at the turn of the century. This was taken in 1999.

There aren’t too many pics of Kim and her Grandfather Arthur Kardashian around. She used to wear her hair crimped, and mentioned in the caption of this pic that she still uses the same machine that her mother used to use to crimp her hair in the 90s!

I’m loving this picture of all the Kardashian and Jenner siblings together.

I think the caption Kim wrote for this post perfectly shows how much she cares for and appreciates her grandma.

“Happy 87th Birthday MJ!!! You are the woman who taught me my work ethic and have taught me so much about life, love and relationships! I’m so grateful to have you by my side to always go to when I need someone to keep it all the way real with me! I love you so much and hope today is magical for you grandma. I love you so much!!!” – Kim Kardashian

Here’s a classic picture of the Kardashian siblings posing together with their dad.

He might not be related anymore, but I couldn’t write this article without a Kanye mention. Kim met Kanye in 2002 and the two started dating in 2012. The couple known as Kimye then married in 2014 in a massive bash we all remember. They have since had four kids together including their first daughter North West. Here’s a pic of Kim and Kanye before they started dating, in 2008 or 2009.

The Kardashian children’s dad was famous in his own right, way before the kids became household names. This is a picture of Kim at 18 years old, hanging out with her dad.

I’m not too sure how old Kim is in this pic, but there’s no doubt that she and her dad had a great relationship until he passed away in 2003.

In my humble opinion, this stylish 90s clip look should definitely make a comeback.

Just another cute trip down memory lane of Kim and her dad. Old Kim Kardashian struts her stuff wearing a retro denim jacket in her pre-fame years.

Here’s a photo of Kim and Kourtney being carried to bed by their late dad. Because they were only one year apart, these sisters would often wear matching outfits!

If you’re interested in Kims life pre-fame, give her a follow on Instagram, where she posts regular throwbacks of her younger years spent with her siblings, parents and best friends.